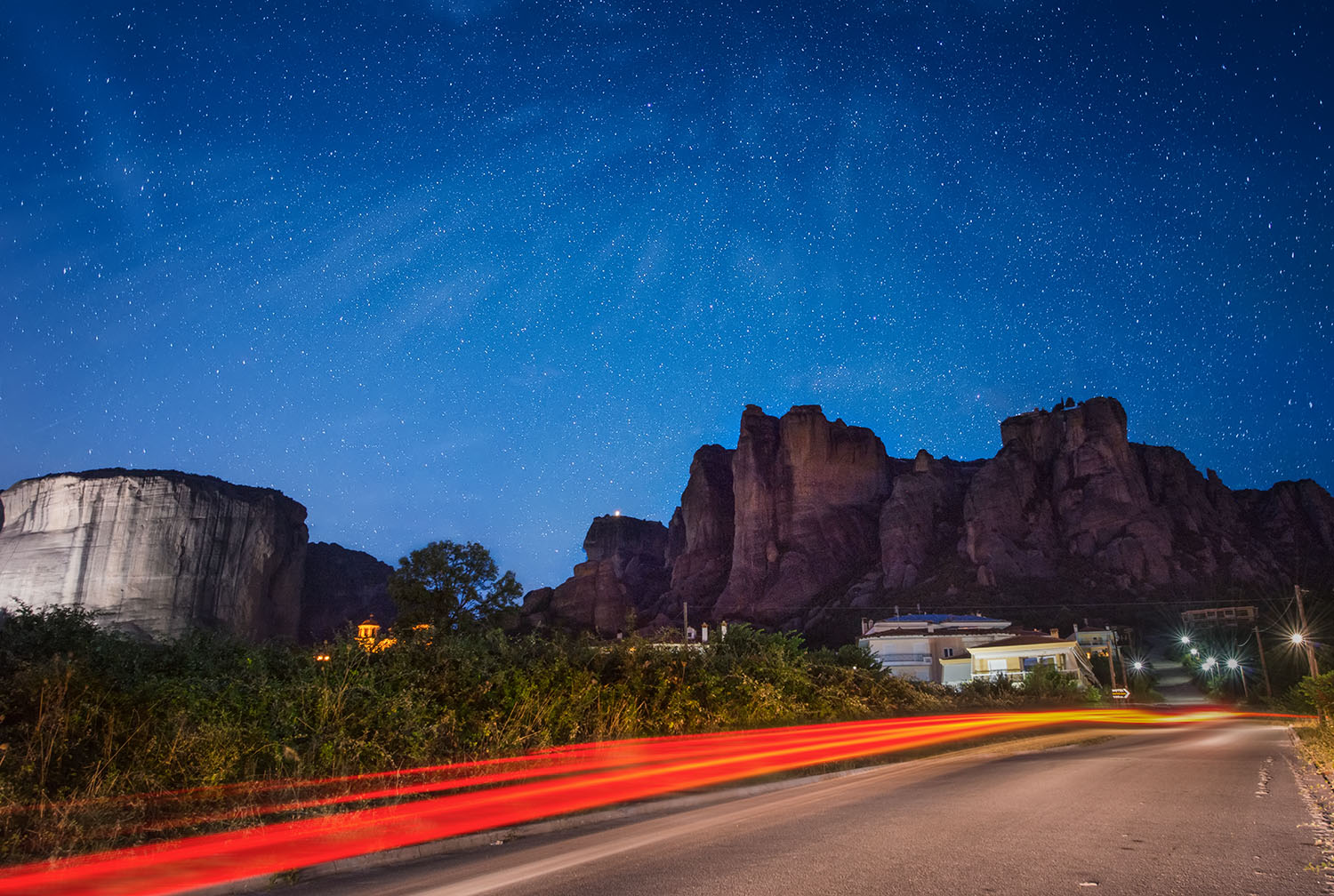 I was on the streets of Kalambaka when I saw this dark road leading for the Meteors. The road was very dark, only a few lights in the distance created a bit ‘of light pollution, my personal goal was to portray some few stars. I take for this picture 5 shots (without BKT), one of which is much higher intentionally to bring it back with the exposing to the right and pull out the stars. Suddently a car, probably a resident, has started to switch back and forth a few times. Now, in addition to the curious fact itself, I do not hide that for a moment I thought he was observing me, the fact is that he ruined some shots which I then had to repeat it before. However, the passage of the car allowed me to create an additional element to my photo,  by inserting it in one of my shots to create such an effect full of sky and foreground.

As I said, I made this picture by taking several pictures, I used three of them in Photoshop:

-The first for the correct exposure of the lawn, road, meteors

-The second ETTR  for the sky, that I worked in Camera Raw to allow the stars of “exit “outside

-The last one with the passage of the car on the road.  I knew his movements 🙂

The monastery of Varlaam from one very close shot, I think closer than that position as it was virtually impossible. This image is in the same location as the previous picture The middle, in fact the place was so favorable as views that was enough to turn myself to portray what was behind me. The monastery of Varlaam is hit by the sunrays of sunshine that golden hour. I realized this image with just one shot, even with Photoshop I did not so many changes, so I can say that this is one of the only picture where I did not changes using Photoshop 🙂 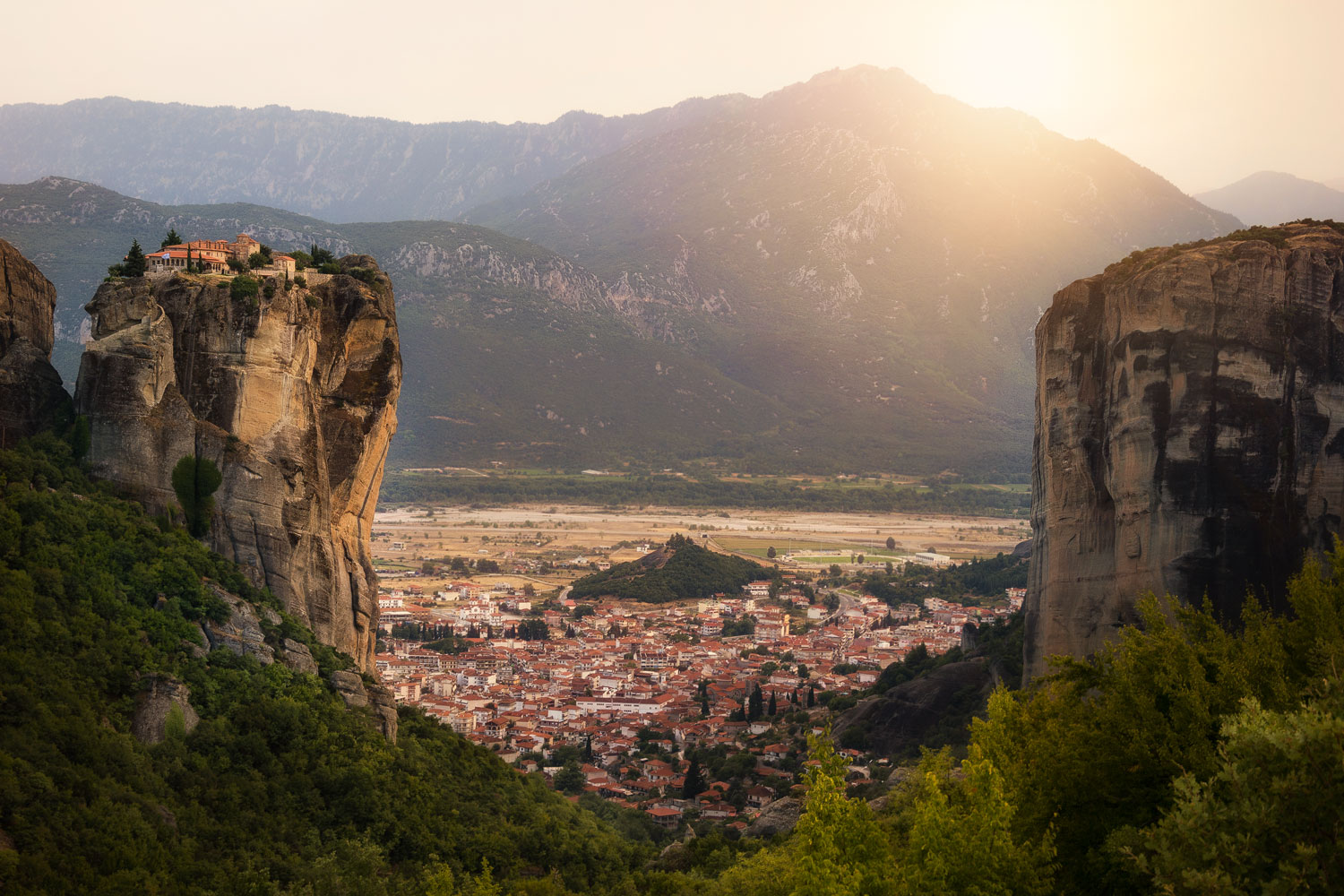 I took this picture while I was on the promontory overlooking the meteors. What you see in the background is the town Kalambaka located at the foot of the beautiful monasteries. In the image on the left is the impressive monastery of Agia Triada, the most difficult to achieve, personally I climbed up to the top starting from Kalambaka and I assure you that it was hard 😀

The photo was taken on the road that connects all the meteors on top with each other, the image is the result of a single shot that I edited completely using Camera Raw. I stepped up the reflection of light to give more depth to the image that  looked too flat before. For the rest it was all a work of contrasts, lights and shadows using layer masks. 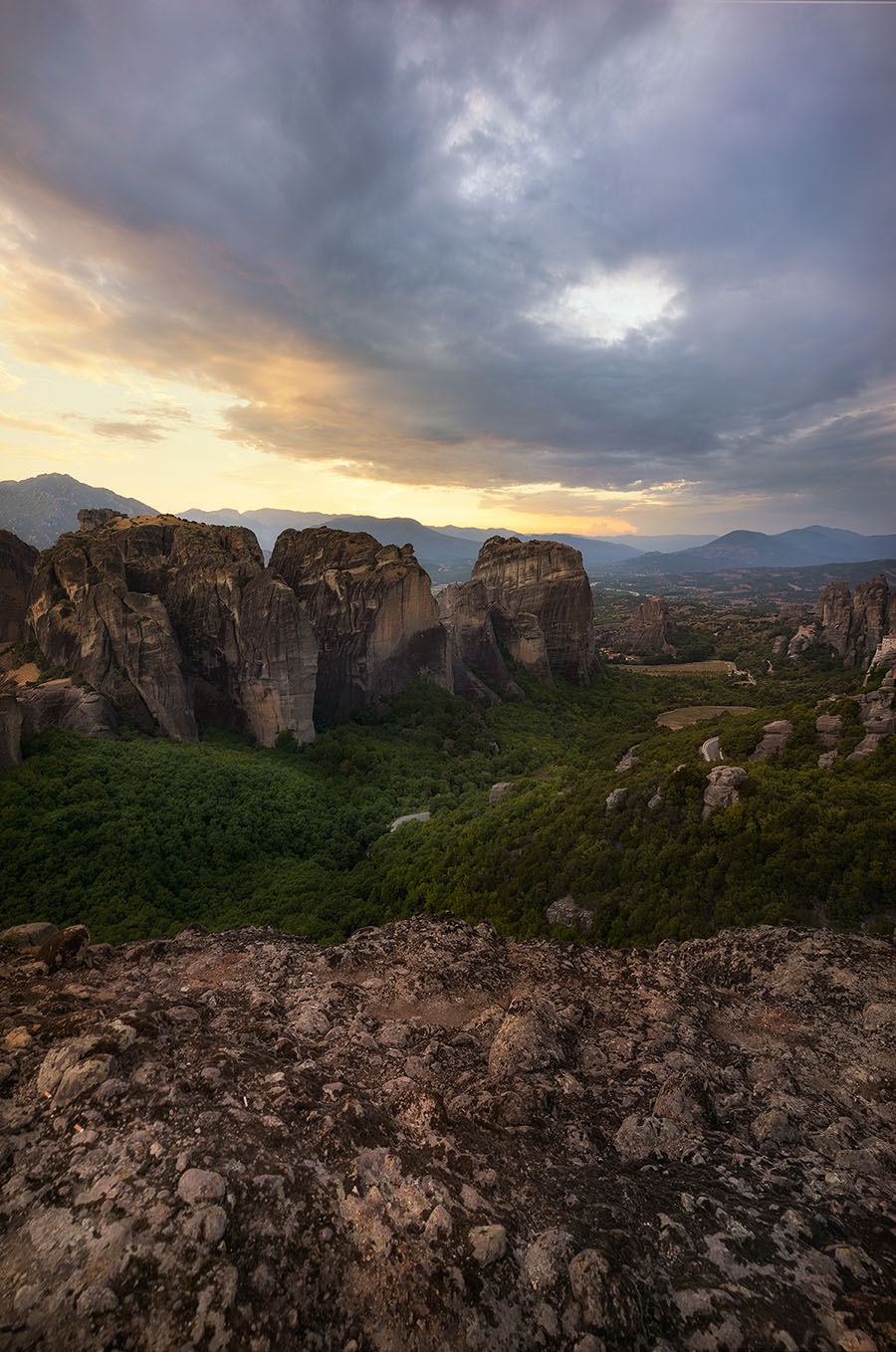 Vertical version of my previous post “Infinity Meteora”. The place where I took this photo is a rocky promontory that extends downstream from where it can be admired one of the best views of the meteors, needless to say that all around this promontory there are only cliffs and escarpments  but 360 degrees around it viewer a magnificent view.

To shooting this picture I reach the place in late afternoon, close the blue hour. Taken 5 shots and edited with luminance masks discarding the last overexposed one (useless, too bright). During the Photoshop work I brought the color to yellow rather than the blue of the blue hour, I made several comparisons and I think that this place has an impact much nicer using golden shades. I worked a lot on light shadows and contrasts, not many details as I have tried to increase mostly the glow effect of the picture.

Here is another great spot to Meteora, i think this is the best view you can find here, it is located near the monastery Rossanou that is in the middle of the chain of meteors, perfect to have a wide view across the valley and of Kalambaka. I reach this place one hour before the sunset the place is a small pitch on the road that runs through all the meteors, I stopped only a few minutes to make some shots. From this shot you can clearly see Kalambaka, which is the city that lies at the foot of the mountains complex of meteors, in the middle of landscape.

Taken 5 Shots, merged using the merge of Photoshop CC – Merge as HDR Pro, I prefer use manual blend but the image was very very dark so the HDR Pro will give best results. 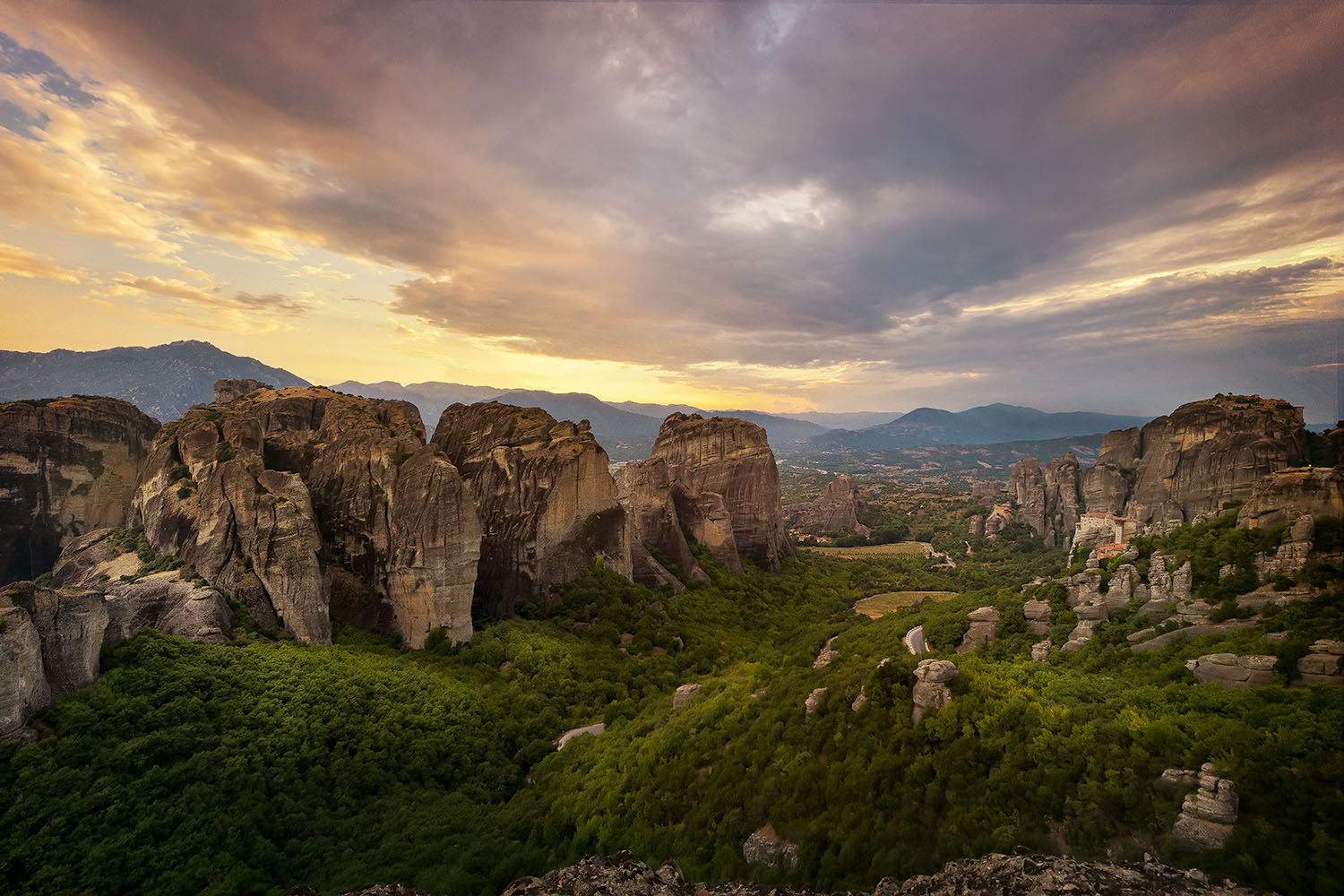 Second shot of this magnificent place that is Meteora, this is definitely one of the most interesting and most beautiful spots that can offer Meteora, a spot near Rossanou monastery in the middle of the valley. Watching on the right of the landscape the ones you see on the right are respectively the largest and the smallest monastery of the 6 in the Meteora area. The biggest high is the monastery of the Great Meteor, under the rather small Agios Nikolaos.

Taken 5 Shots, and entirely merged manually with the help of luminance mask,  some points of the landsape was very dark so i use all my exposures, usually I discard the most overexposed of the series but this time was necessary. I intensify colors bringing them more yellows, i make also a big work on the lights who hit the foreground.

Hello to all guys I’m back from my trip in Greece that I posted in my previous post. I visited so many beautiful places and start from the very beginning of my trip. Meteora with the meteors are an amazing place, beautiful and full of magic with their aura of mysticism of the sanctuaries, to be meteors not only admire a beautiful landscape and an important UNESCO heritage site but also a place that makes you think, a magical and enchanting . There are 6 monasteries around, Agios Nikolaos, Agios Stefanos Aghia Triada, Great Meteoron, Roussanou and Varlaam. I visited all of them but I am not going boring you to tell you about each one but the panorama you see in this picture is taken from Roussanou, my favorite, small and middle where you can admire the most beautiful view of Meteora, this is just a taste will be followed by many others 🙂

I had 5 shots and I merged with the function automate Photoshop, it is time that I do not use this technique to create the HDR but this time it seemed necessary caused by the glow behind the mountains of Meteora. I created many shadows in the foreground area, while having the function of my Nikon D-Lighting at most, I had to lighten considerably shadows with Camera Raw.