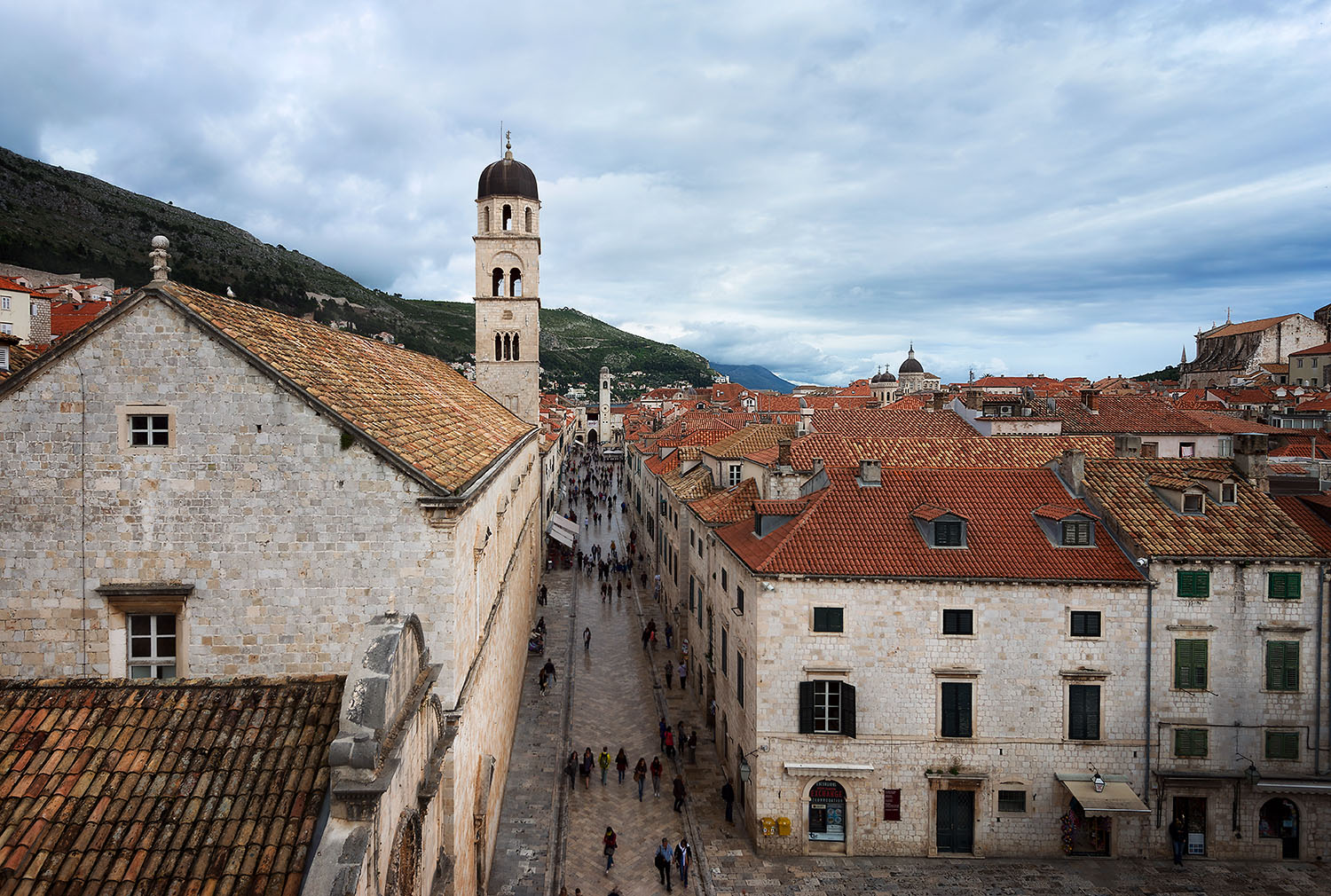 Dubrovnik taken from the top of the walls that characterize it. Dubrovnik is a beautiful Croatian town of great beauty Unesco Heritage , a place that for a very long time I want to visit and photograph. The pictures I ‘ve taken is at the top of steps of the walls entrace , these are the main attraction of the city and walk around the perimeter of Dubrovnik leaving you the chance to admire the beauty of the buildings and the cliffs on the sea.

During my stay in Dubrovnik I have been very unlucky with the weather having often found clouds and pouring rain. In fact I went to visit the walls of Dubrovnik in one of the rare non-rainy afternoons of my weekend. Also as it is seen from the threatening clouds 🙂

I made five exposures for this photo but in fact I have used only three that I worked using Luminance Masks, I have not done a lot of color work for my coverage of this picture was very limited but I dwelt a lot of shadows and contrasts to give a slightly surreal look to the image 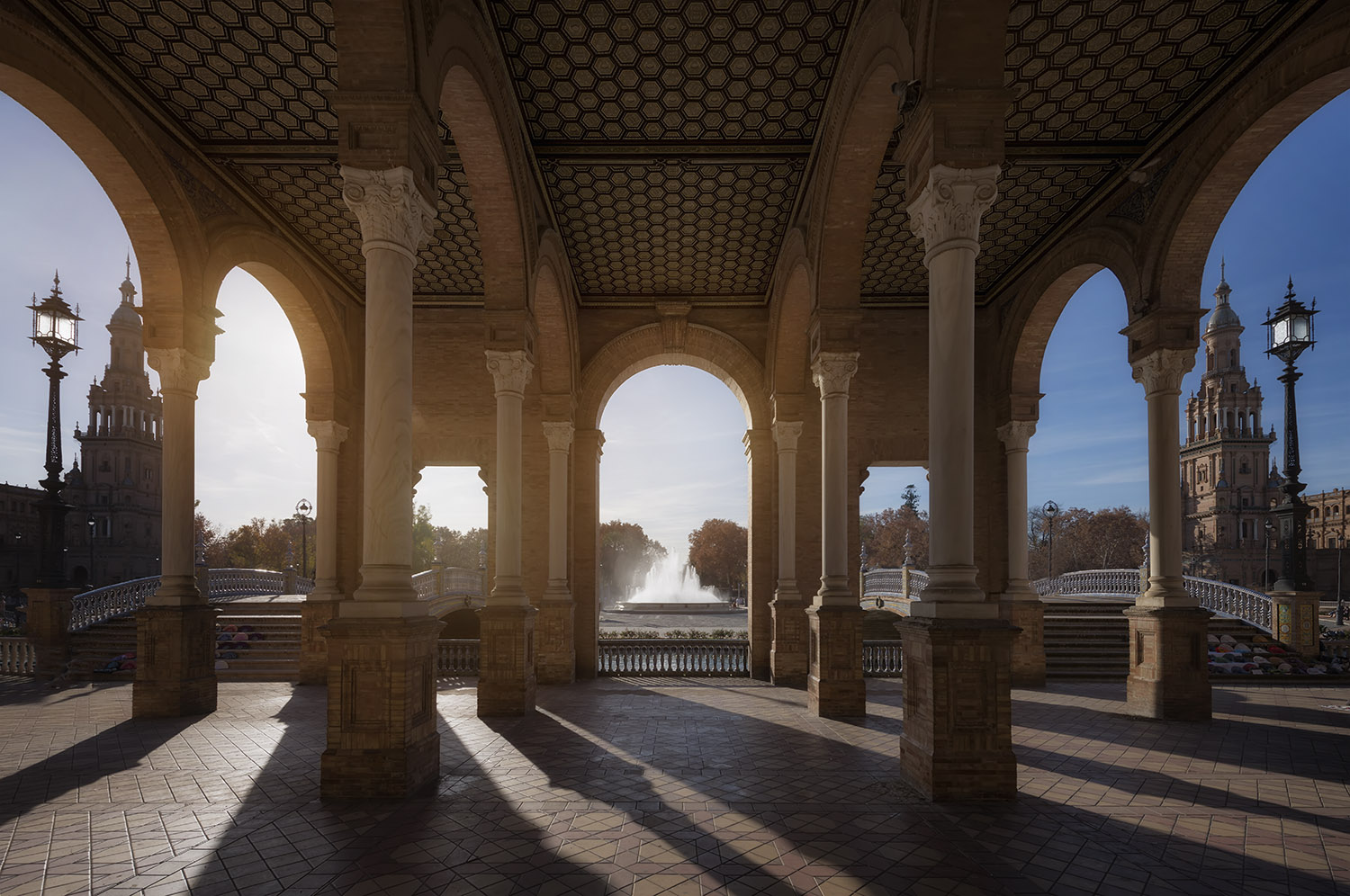 A detail below the columns of the beautiful Plaza de España in Seville. I can say without exageration that this is one of the most beautiful squares I’ve ever seen in my life. Plaza de España is a square full of beautiful and semicircular building with symmetrical construction. Inside the square there is a semicircular waterway where you can rent boats to sightseeing the square by the river. During my visit in Plaza de España it was hit by a warm, bright sun that brought that day the temperature to 25 degrees in the middle of December 🙂
I realized 3 bracketed shots, I used all three shots to take with the luminance masks the desired brightness in the most contrasting areas of the colonnade. I deleted some tourists passing in the distance and I emphasized the effect of sunlight through the columns of the square. 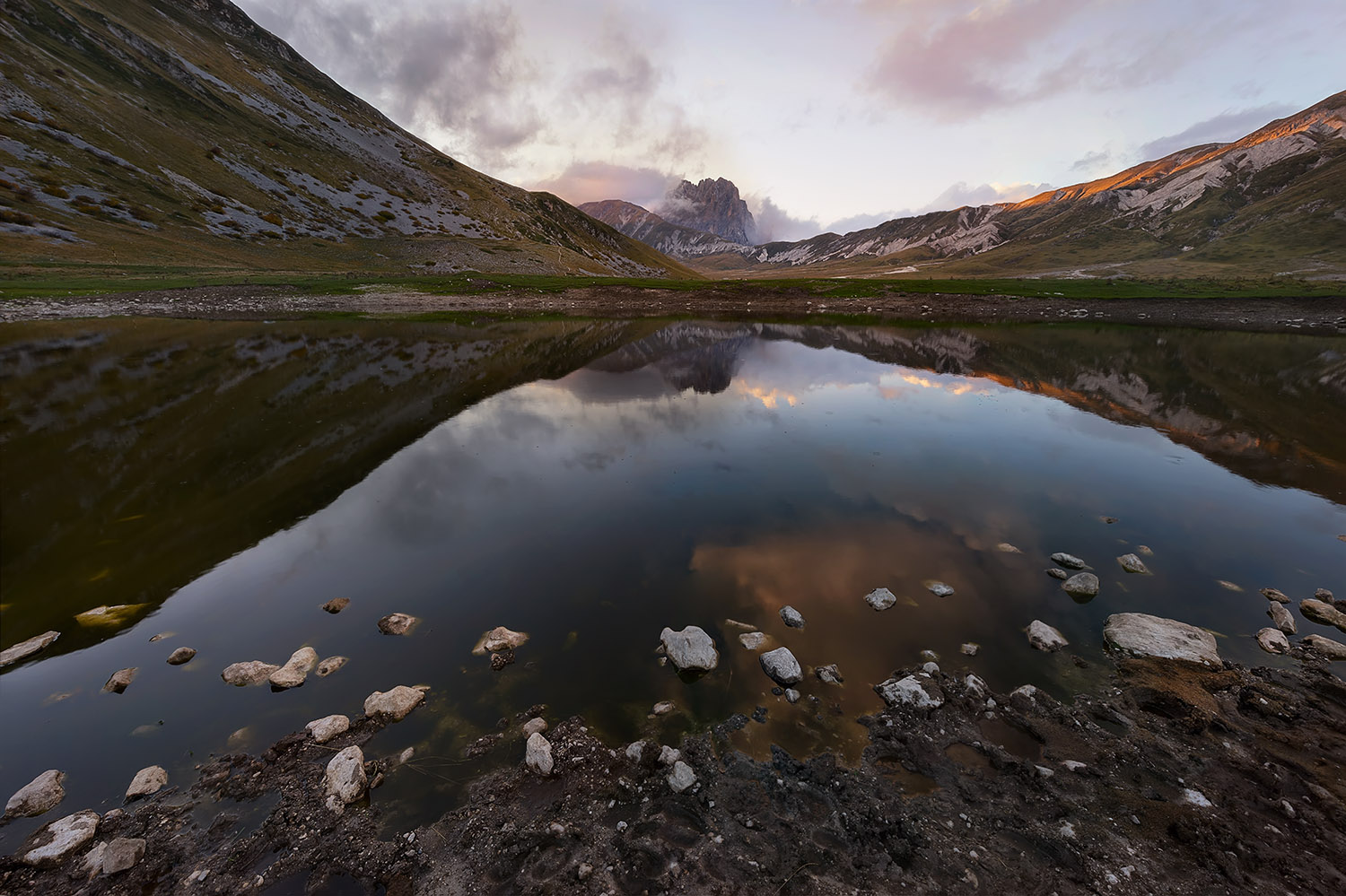 Hello guys, first of all happy new year and lucky 2016 to everyone!! I decided to start this year with a series of shots taken at Gran Sasso during last autumn. It ‘a series of spectacular shots of all the magnificent nature that you can find those heights, including stars. I decided to start in chronological order from the first photo taken during sunset on the lake overlooking the tip of the big horn of Gran Sasso, a sight to leave speechless by the beauty, immersed in nature for hours it was also fun to see the wild horses and the ox that occasionally approached the lake to drink.

I made dozens of shots of this part, from the golden hour to finally get virtually the blue hour. The photographs taken during the golden hour were definitely the most fascinating in terms of colors, but the bright light of this hour restrained me to choose these shots, while the exposures taken during the blue hour were much more attractive but less marked with reflections. So I decided to  choose a series of exposures taken in the mid point of time, as lights and reflections that were the right measure.

To make the shot more interesting I chose to portray most foreground, rather than making an image somewhere between water and sky. This difference needed careful focus of rocks below than the horizon. For this reason I made a focus stacking on the rocks on the bottom and then toward the horizon to better frame the mountains and have an image that was both elements in focus. Until the latest shots, the top of the mountain was covered by clouds, only in the late clouds go away from Corno Grande. For this reason I show the mountain “discovery” from the clouds with a exposure that I had made a few minutes later, masking it with those previously results obtained from focus stacking

1 Exposure for the mountain in the horizon 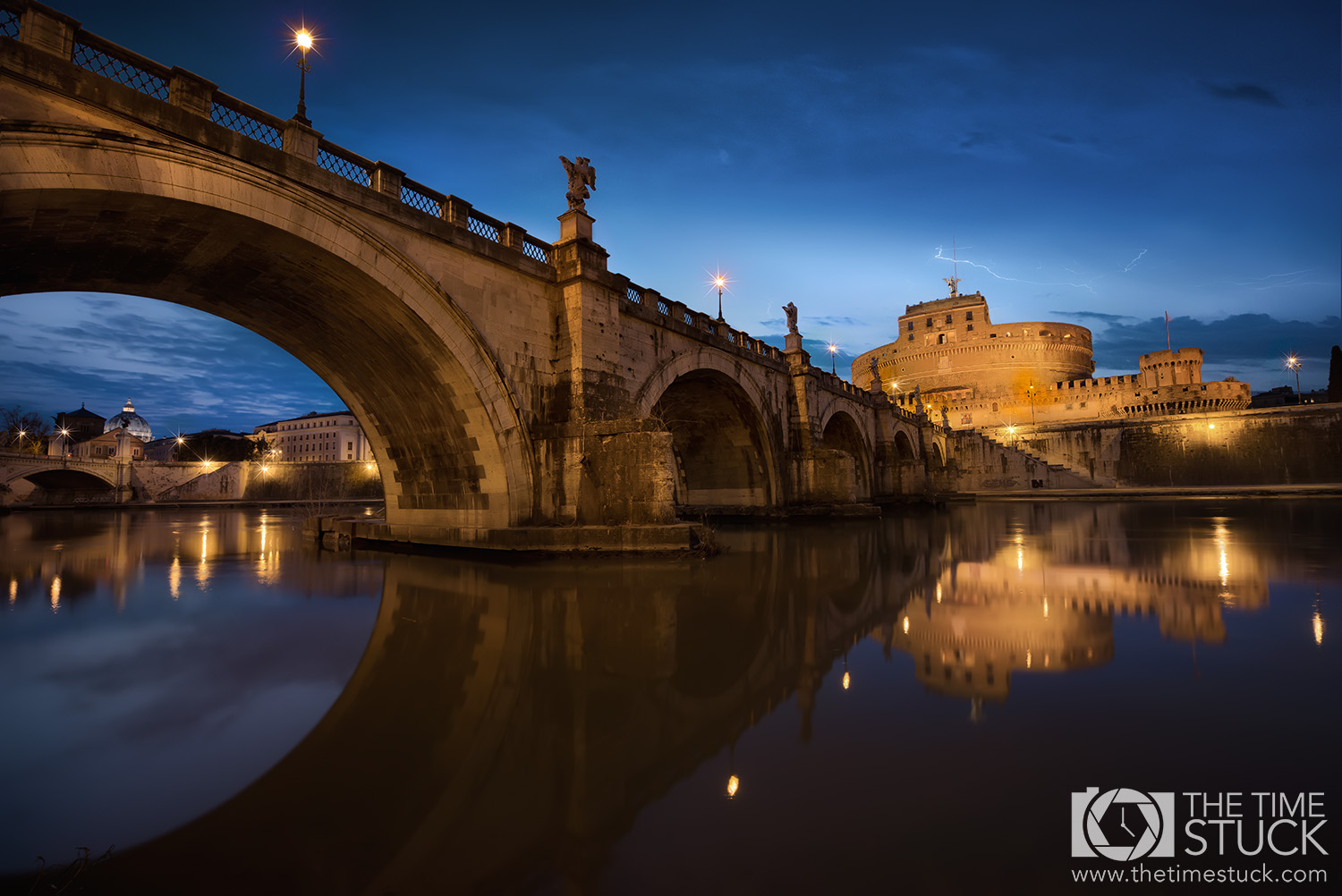 The Path of Angels

Picture from the slums of the Tevere at  Sant’Angelo bridge, with its castle. The bridge of Sant’Angelo does not need any introduction, every time I shoot in my city is one of my favorite photo destinations. 😀  The final result is a series of bracketing expoures obtained from seven long ones, I wanted to capture as much as possible from the sky that threatened rain and I did 🙂

Exposures were processed with Photoshop CC through the layer stacking (not all used) and the use of luminance masks, starting from the image darker and going slowly to lighten the rest of the photos with other exposures. 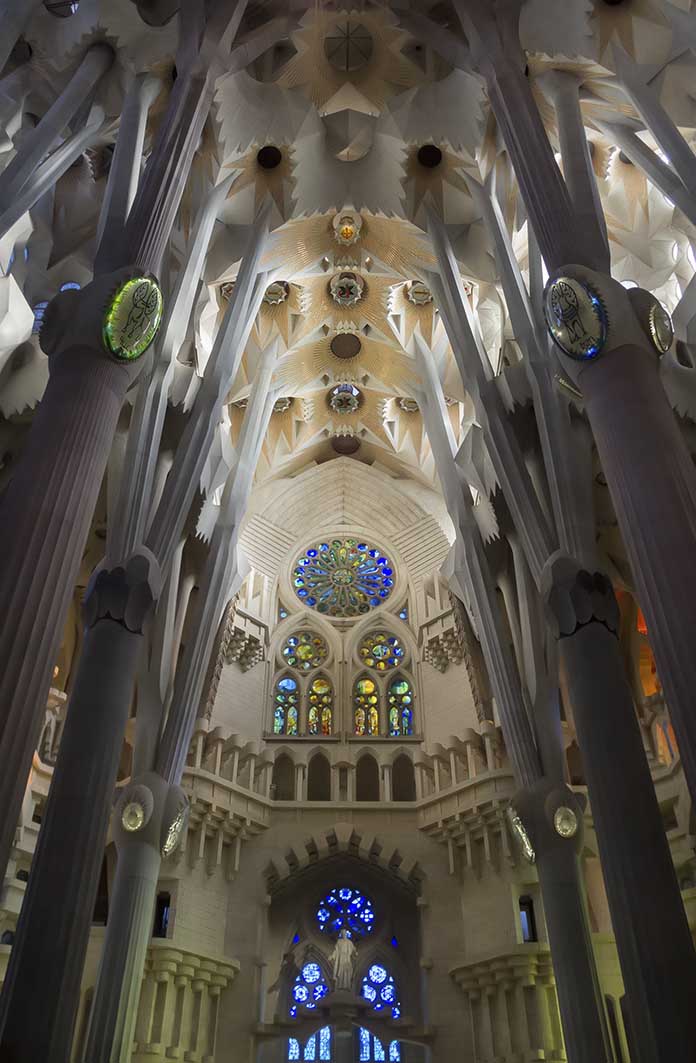 A few weeks ago I was in Barcelona and I could not take pictures and post the Sagrada Familia. What to tell you guys… as Roman, I’ve seen hundreds of beautiful basilicas and churches but I realized that Sagrada Familia is definitely

in the top 5 of the most beautiful churches of all times. It ‘an immense work, shining and colorful, an explosion of details, colors and unimaginable magnitude. Trust me that any picture will not portray in all its beauty.

About the realization of the image of Sagrada Familia I am totally committed to the luminance masks, I cleared the bottom using the overexposed image and darkened instead the upper using the underexposed one.

With this post to wish you all a happy and peaceful Christmas and thank you all for the support you have provided me during this year.  🙂 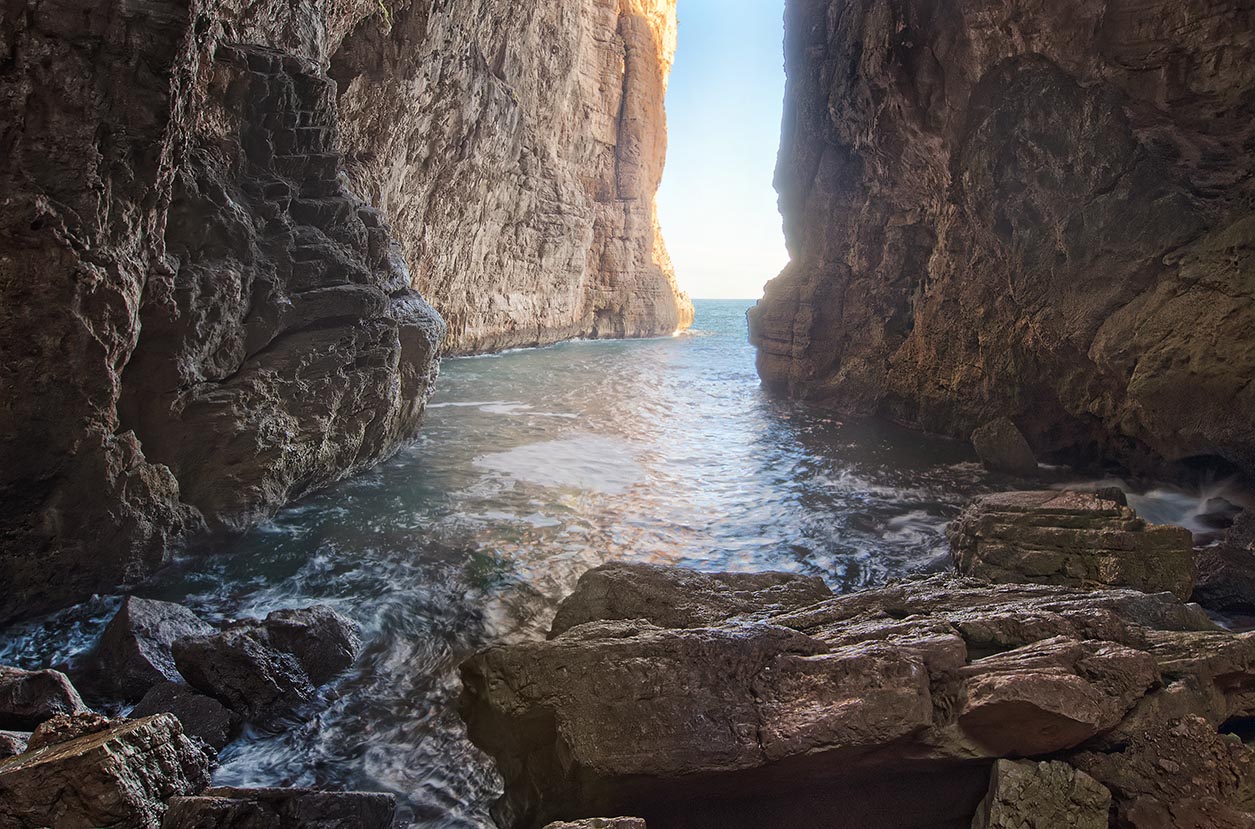 This amazing place is in Gaeta a charming seaside town near Rome, where in addition to making excellent cuisine, there are also beautiful landscapes to admire, including the striking Turkish Cave. This cave is just the crack in the rock that you see in this post, according to the legend, the rift was created in the time of Christ’s death, when he tore the veil of the temple of Jerusalem. Along the steps leading into the bowels of the mountain you can see on the right wall with a Latin couplet alongside the so-called “Hand of the Turkish”, in the shape of a hand that would have formed when an “unbeliever” turkish sailor, who did not believe the story that had been told about the cause of the crack in the rock, was leaning against the rock that became incredibly soft under his pressure forming the imprint of the hand. The Turkish Cave is an amazing place to see with the naked eye to understand the greatness of so much natural beauty. The whole cave does not have to take a lot of light so I took this HDR 9 exposures well that I only edited with Photoshop and with the use of Luminance Masks.

After a day in Ljubljana I moved to Bled, a place that for some time I wanted to see and photograph. Lake Bled is one of the most fascinating places I’ve ever seen. I took this picture in the swimming side of the lake, which offers

Sunset at the Marseille’s harbor, a fisherman tries to find something in the waters of the harbor, I honestly do not know if I ever eat a fish caught in the harbor

The prospects of the jetty on the sea or lakes are a great classic of photography, especially the HDR, once again I give myself to the banality of the subject but I can’t  resist to it 🙂 Also this photo was taken in

All the best photo taken during my travel in korea

A shot on a mountain view in Passo Falzarego captu

This image comes from a freehand single shot durin

During this shot the sun was lowering in the sky a

In the splendid setting of the Alps I took advanta

I know, there are many photos that I am posting ev

Here we are still in my location of the last posts

I took this photo earlier than my last posted last 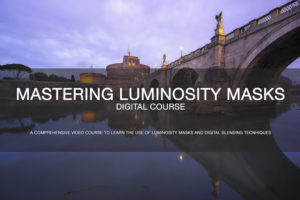